Skip to content
Press Enter / Return to begin your search.

So, I have tried to come up with a clever opener for our overall experience last night at The Handsome Cab; and to be 100% with you … underwhelmed is the only word that continues to rattle around in my head.

In December of 2017, my husband and I had visited this restaurant for the first time.  We were extremely excited that a Tapas/Wine/Piano Bar had finally opened in York! It was something extremely fresh to the restaurant scene in our town that we did not already have, and it had the upscale style with an edge that I’m typically drawn to when choosing a restaurant to eat at every Thursday.  I was SO impressed, that I actually had asked the host if it would be possible to speak to the owner, and gather a little more info about the restaurant, but was told the he was unavailable….(looking to my right, yes he was unavailable because he was sitting and drinking with a large group of people and had no time to put his mixed drink down to listen to the praises of a pleased customer). But, we were impressed with the Tapas we ordered (during this visit we only ordered Tapas or “Sharables” as they are referred to on their menu) the fantastic and extremely lengthy wine menu they had, and the ambience, so we quickly did not hesitate to add The Handsome Cab to our growing list of “go to” restaurants in York, PA.  Did I mention that the restaurant was packed?! Yes, it was a Thursday night as well (which is our weekly date night), and there was standing room only at the bar, and a 25 minute wait for those without resevations.

When I called my husband early afternoon yesterday, I asked him to select a restaurant for us to eat at that evening, and make reservations, he picked The Handsome Cab.  We had to laugh at ourselves a little when we walked into the restaurant, for thinking a reservation was necessary for this visit. There were a handful of people sitting at the bar, one full table in the back, and a table in the front dining room occupied by 6 people.  We would have been ok as a walk in (*rolls eyes*).

We were seated by the front windows, and shortly thereafter, a very nice waitress approached our table.  She introduced herself, went over the specials, and asked for our drink orders.  My husband ordered a wine flight, while I stuck to water for the time being.

The wine was brought to our table without delay, and we ordered our Tapas (“Sharables”) and entrees.  On their dinner menu, they have the option of doing half portions or full portions for some of their dinner options. I found this extremely refreshing (and had completely missed it on the menu during our last visit), as most restaurants anymore, give WAY OVERSIZED portions that leave you feeling stuffed to the gills.  It’s nice when you want to order several Tapas, that you do not feel guilty about ordering a dinner as well, and have the option to order a smaller portion.

About 25 minutes after putting our order in, our Tapas began to come out……. *the shit is going to get real* 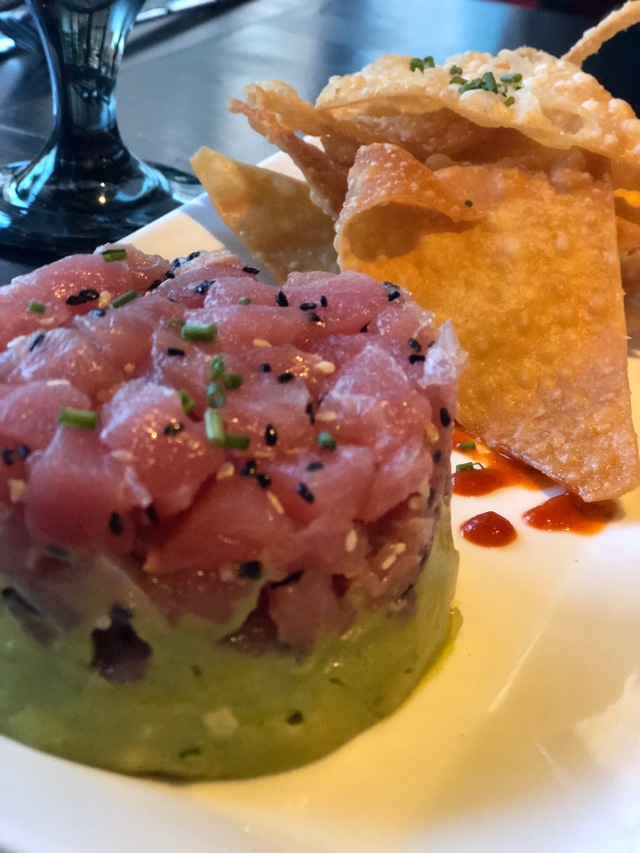 I’m not going to complain about the Saku Tuna Tartar.  The fish tasted fresh and was the right texture and temperature.  I will say that the last time we visited, we ordered the same thing, and the presentation was a little neater, and screamed upscale fine dining.  You can see what I mean from my Instagram post from our last visit *here*.

We Also ordered the Crab and Avocado Crostini…. we also got this the last time we visited *see image here*, and this time I was less then impressed. First we will chat taste.  The crab was dry.  It was almost like it had been frozen for a few months, quickly defrosted and then steamed.  It also had a greyish-brown hue to it.  Maybe it was the age of the crab, maybe the chef got a bad batch of crab, or maybe the Bloody Mary Aioli it was topped with was watered down this time, and had soaked into the meat, giving it an unusual color profile, but needless to say, it was not all that.  Lets talk about presentation.  I do remember the last time that we had visited and ordered this dish, I didn’t like the fact that you had a massive crab claw sitting on top of the Crostini.  It is a little annoying to have to pick up the claw itself to eat it, before you can enjoy the goodies  (or not so go during our experience this time) underneath. It is also where most of the Aioli is, which leaves the underlying crab below, a touch on the dry side; and with a dry crouton base, you need some form of moisture to balance the dish, otherwise you end up with dry on dry on dry. The only slight salvation from this is the tiniest amount of avocado, spread thinly on the crouton below. While I appreciate healthy portions of ingredients (especially when it comes to seafood) on my plate, the experience of consuming them also has to be pleasurable. —For me, this one….not so much.

Our third, and final Tapas were the Brussel Sprouts.  They are “charred Brussel sprouts with bacon and chalet butter”.  I do not have a photo of this because honestly, we were hungry and it was already hitting around 45 minutes since we had placed our order. I will say that I found the description of this Tapas to be a tad misleading. Typically when I hear the word “charred”, I think blackened and crisp.  These were not that at all. The were mushy and soggy, almost like they too had been frozen.  The bacon was soft and mushy as well which masked the difference in texture from the sprouts, and they were drenched in something that could send a person my age (29) into cardiac arrest. It was basically a pile of mushy brussel sprouts that had a slight hint of bacon flavor drenched in butter. Again, underwhelmed.

We finished our Tapas in about 12-15 minutes, and sat around staring at each other, wondering, at about an hour and 15 minutes, where our food could be and what was taking so long, considering there was basically no one there.

At this point, I couldn’t help but notice that again during this visit and right outside the window we were near, the owner had sat himself outside with a cocktail and a large group of his friends; a group that continued to grow every 15-20 minutes. 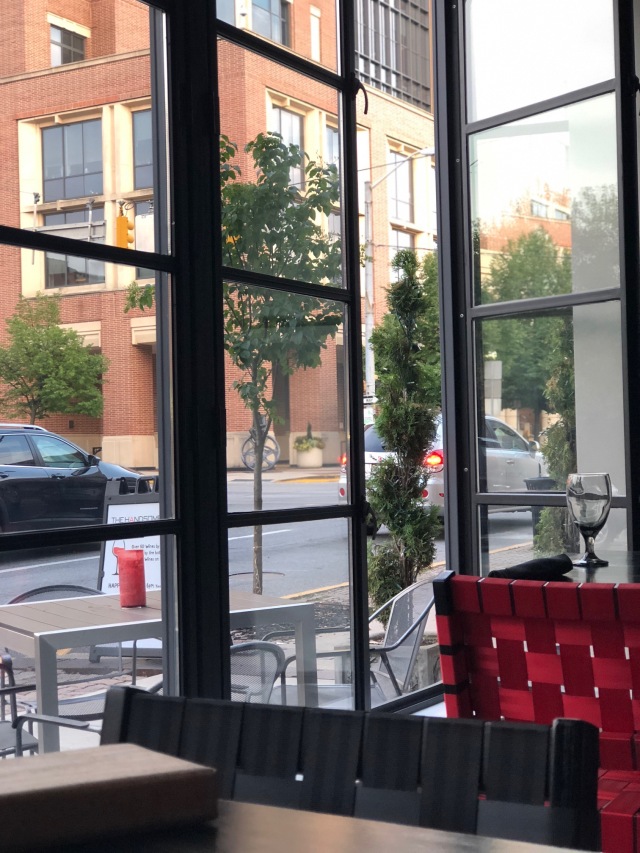 ****Rant**** I am not a fan of going to any business, restaurants or bars, where the owner is socializing like a paying customer.  It is a terrible look for businesses to portray to the actual customers who are paying high prices for food and expect quality in the dishes all around.  At restaurants that have healthy followings and are regularly busy, typically the owner is in the back with the chef, expediting and inspecting dishes before they leave the window.  The is a standard practice of quality control that maintains consistency and excellence in dishes being served. I have worked in many restaurants as a waitress for almost 9 years of my life; and in my experience, the owners that spend time socializing and not treating their restaurant like a business, taking every fine detail as seriously as they should, end up with few customers (typically only their friends/regulars) and eventually close. It never matters about the beautiful decor or the trendy atmosphere. When people go to restaurants to eat, they are mainly judging the food, and when that food is lacking, the restaurant begins lacking customers.

So our entrees—– *rolls eyes again* 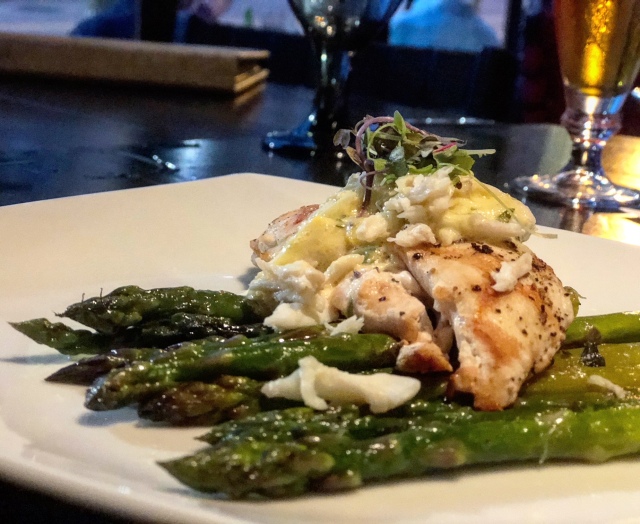 I had asked for an alteration to this dish.  I am not a huge starch fan as far as side dishes go, so typically I find another vegetable and ask if I can substitute that.  It seemed on the menu, that there were really only two side options: Asparagus and Herb Roasted Potatoes. I asked if there was any other steamed vegetable I could get instead of the potatoes, and the waitress came back after speaking to the chef and said they would double up my asparagus. —-ok I guess. When the plate came out, the overall presentation was sloppy.  It looked like someone had run a knife down the middle of my chicken, which during the cooking process, could explain why it was so dry—- and I mean dry, like the damn desert. You would think that with the béarnaise sauce and crab it was topped with, I wouldn’t be able to tell too much, but there was very little sauce and it almost seamed to disappear into the chicken….and the crab *rolls eyes for the third time*. I don’t know how you can have such dry crab….dry on dry again. The asparagus was cooked and seasoned perfectly .

My husband ordered the Stuffed Shrimp Entree.  There was no half portion option for this dish, and at $28, when you are only getting 3 shrimp, it better be damn good.  Well, the stuffed shrimp was good, but the Old Bay Risotto it was bedded on was undercooked, crunchy, and lacked any flare to compliment the shrimp and crab.  And can we just say— 3 shrimp? Really?!  I know above that I was speaking about how I liked the half/full portion options, but FOR $28 DOLLARS?!?! Absolute madness!

As we chatted about our dinners, we kept coming back to the same conclusion.  Disappointment. Our bill was close to $140 before the tip, and we didn’t even think that our experience with the food was worth half that.

Conclusion: The Handsome Cab needs a serious food make over, to get it back to the standards (and then some in regards to the owners socializing habits during both visits) that would tempt us into reconsidering ever going back there.  If I want to drop $140 on date night again, we will just go to The Left Bank, or Rockfish Public House which are both literally right next door. Ta Ta Handsome Cab.  You are no longer looking so handsome.

View all posts by myprimroselife